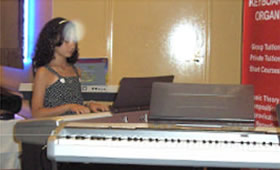 Well done to all  performers in the Good Friday Appeal Concert on March 16. The concert raised $1,500.00. Over 200 people attended at Starlight Centre in Taylors Lakes and from all feedback the concert was a great success!

The aim of the concert was to raise awareness of the benefits of music education in children’s lives and in our community. The concert was an opportunity to highlight the wonderful work and commitment students put into their music.

All performers received a trophy as a momentum of the afternoon and McDonald’sprovided food vouchers and encouragement awards for each performer.

Congratulations to Jayme Ationne-Diaz and Jane Hoh who received the LG award for Most Outstanding Student 2007/2008, and to Natali Coric who was awarded the 2007/2008 Student of the Year Award. All three students also received a LG Micro DVD player courtesy of LG valued at $180.00 each. Both awards will be an    annual event at the Academy.

The audience was entertained by over fifty performers on piano, violin and vocals. The concert concluded with Jena-Maree Marino singing “The Greatest Love of all”, a song which truly captured the meaning behind the concert and will be the theme song for the Good Friday Appeal piano-keyboard fundraising concert.

Many thanks to everyone involved in making the concert a great success. The next fundraising concert is for Daffodil Day on August 17. For further information visit the AKA website or call 9310 9532.

Presentation of cheque on Channel 7

Thank you to Jacqueline Fletcher for her support and advice in preparing for the Good Friday Appeal Piano-Keyboard Fundraising Concert and for arranging the opportunity for the Australian Keyboard Academy to present our cheque live on Channel Seven Good Friday Appeal. Rohan Wenn interviewer commented on how the concert was a great example of “Kids Helping Kids”. Lorenzo replied, “That right!, It’s a great way for kids to learn that through their commitment to learning music they’re helping other children in our community”. The AKA looks forward to returning back next year “bigger and better!”